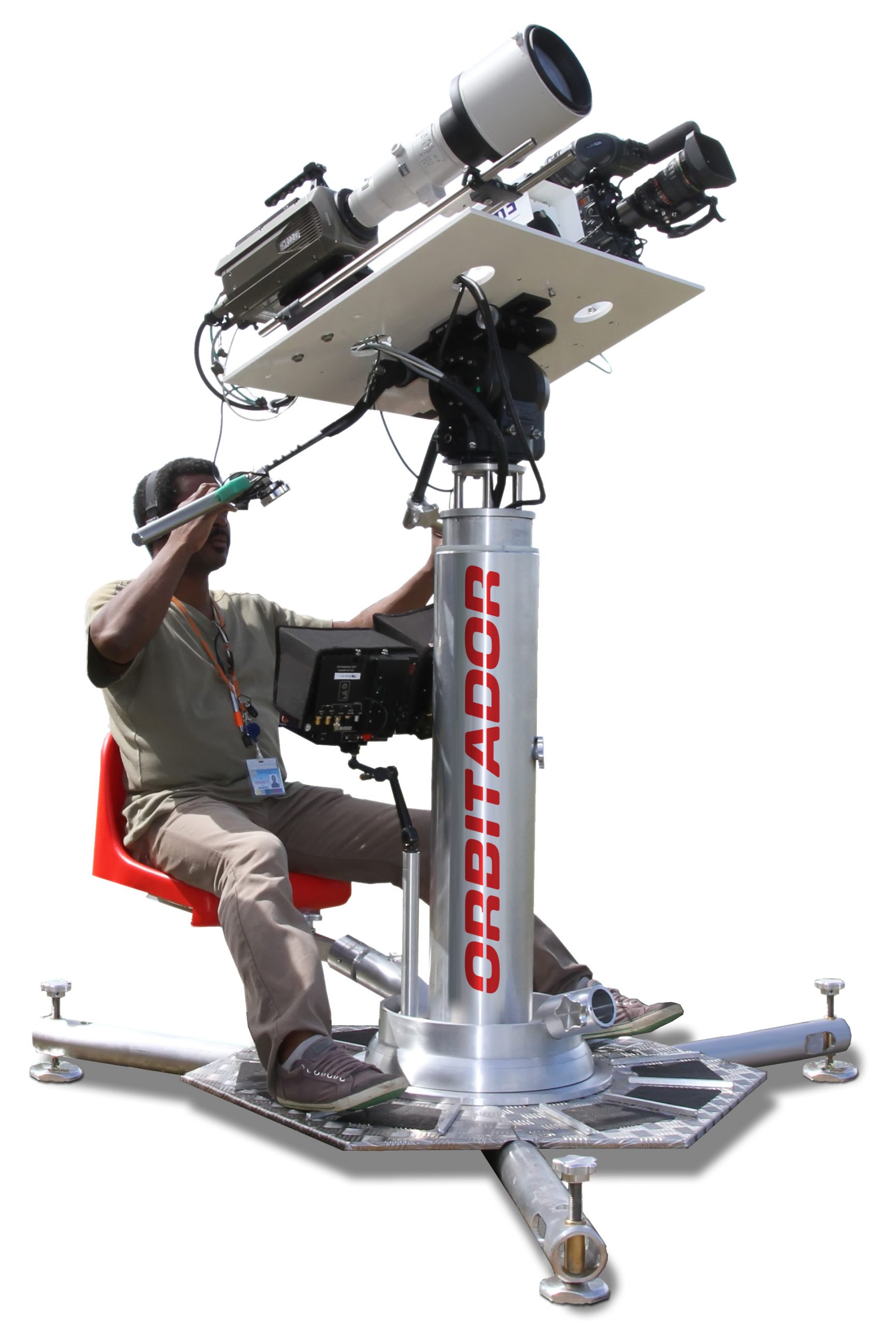 The Orbitador 500 spaceshooter 6.0
is a mobile non-automated low speed/ altitude human tracking system based on the broadcast camera seat Orbitador 500 superflat. It is designed for the tracking, analysis and recording of rockets, aircrafts, missiles and other flying objects allowing tilt angles up to 90° and panning over 360°. At air sports it is applied to capture any kind of flying or freefalling object. An adjustable and very stable telescopic or fixed center column allows for operating above head level while looking at the viewfinders at face level. The viewfinders track simultaneously with the seat, thereby automatically staying in the operator‘s view. The system is delivered with any type of desired pan/ tilt head. It is possible to operate a single camera as well as an array of multiple cameras. The center column is delivered in any desired fixed height – adjustable heights are accomplished by adaptors or an optional telescopic column with an integrated gear box which is operated manually.

The Orbitador 500 spaceshooter allows independent movement of camera and seat, along the same axis. There are two remarkable and patented features of this system, contrary to other systems, the seat of the Orbitador is not directly connected to the camera mount. Almost no shock motion is transmitted from the operator to the camera as the camera mount is not loaded by the operator’s weight. The unlinked rotation along the same axis also avoids unwanted movement of the camera when moving the seat.

The Orbitador 500 spaceshooter comes as modular standard device or customised to individual requirements. Single or multi camera/ sensor assembly, adjustable pan bars, seats etc. are individually combined and modified to your specific needs. For that purpose consultancy at customers` launch or testing sites can be provided to achieve a maximum of operability and conformity.

The Orbitador 500 spaceshooter‘s new and mobile design and its effortless handling has set a new standard for low cost, non automised tracking applications and created new possibilities for dynamic shooting at air sports and many other sports competitions and aero space applications, where flying objects must be captured passing just above the camera position or ascend to very high altitudes up to 90° above the tracking position such as rockets or experimental aircrafts.

It was developed in 2013 for CNES/ ESA/ Ariane Space and is in operation since 2014 at three tracking positions in Kourou/ French Guiana at all launches of the Ariane 5 ECA, Sojus and Vega.

One new sports application is to use the Orbitador spaceshooter as a multi-camera device to combine two aligned cameras showing the same picture centre but different image sections by digitally zooming in one camera.

For instance a normal broadcast camera at soccer can be combined with a 4K camera which can resolve details in ultra high resolution. Another option can be an infrared camera displaying thermal informations of the action.